Although he cautioned readers to not necessarily take those words literally, he writes: “The point is that kids doing and learning things of their own choosing in their own way on their own time is more valuable than making them do stuff. Most kids will prefer Legos to math. Let them play Legos. Some may prefer math to Legos. Let them do math.”

Morehouse, who was homeschooled, draws from personal experience with his own “LegoLand.” He notes that LEGO projects helped him build confidence, learn to solve problems, and appreciate his own creations.

In his blog, Morehouse apologizes for referring to the colorful, plastic blocks as “Legos.” That’s because the plural of LEGO is actually “LEGO,” without the “s,” according to the LEGO Group. Read on to learn more LEGO facts:

On average, each person on Earth owns 86 LEGO bricks.

The first LEGO minifigure was produced in 1978. Since then, more than four billion have been made—producing the world’s largest population group. 4. To Infinity, and Beyond!

It was recently calculated that, laid end to end, the number of LEGO bricks sold would stretch round the world more than 18 times. More than 400 billion have been produced since 1949, but it would take just 40 billion LEGO bricks, stacked atop each other, to connect Earth to the moon. The standard 2 x 4 LEGO brick was patented in 1958, and a 1958 brick will interlock with currently produced bricks. Of course, LEGO Duplo bricks are eight times the size of the originals.

In 2009, using 3.3 million bricks, James May of Surrey, Great Britain, constructed the world’s first full-size LEGO house, complete with working toilet, shower and bed. LEGOLAND in Windsor and Berkshire had hoped to display the house at its theme park, but the creation was deemed too expensive to move. 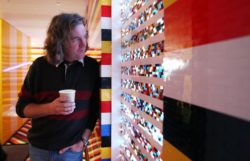 James May / The Telegraph – UK

In 2014, 12-year-old Shubham Banerjee of California used a $350 LEGO set to build a working prototype for a Braille printer. Similar Braille printers retail for around $2,000 online.