Overcoming Obstacles: How Helen Keller Made a Difference

On June 27, 1880 Helen Keller was born in Tuscumbia, Alabama, with her senses intact. It wasn’t until she was 18 months old that she was stricken with a mysterious illness that robbed her of sight and sound.

While she found ways to communicate with her parents, Arthur H. Keller and Kate Adams Keller, as well as her friend and the child of the Keller’s cook, Martha Washington, Helen was prone to outbursts when she was not understood.

The outbursts grew in frequency and, when Helen was six years old, she and her father paid a visit to a distinguished oculist in Baltimore, who had been successful in rectifying similar cases. While nothing could be done for Helen’s eyes,  Arthur Keller was advised to consult Dr. Alexander Graham Bell. Helen and her father left immediately for Washington, D.C., in search of Bell. Helen admired Bell immediately. He understood her crude signs, and their initial interview would lead to friendship, companionship, and a love that would compel Helen to dedicate her eventual autobiography, The Story of my Life, to Bell.

Bell advised Arthur Keller to write to the director of the Perkins Institution for the blind in Boston to inquire if they could recommend a qualified teacher to educate Helen. This communication resulted in, what Helen considers, the most important day of her life. Anne Mansfield Sullivan arrived at the Keller household three months before Helen turned seven years old. Within six months of her arrival in Tuscumbia, Sullivan taught Helen hundreds of vocabulary words, using the manual alphabet, multiplication, and Braille.

In 1890, when Helen was nine years old, she learned of a deaf and blind girl in Norway who was taught how to speak. Determined to learn as well, Helen and Sullivan ventured to the Horace Mann School for the Deaf in Boston to consult the principal, Sarah Fuller. Fuller began instructing Helen at once. Passing Helen’s hand lightly over her face, Fuller would let her feel the position of her tongue and lips when she made a sound. Helen then imitated every motion and, in an hour, she had learned six elements of speech. On returning home, Sullivan tirelessly took over as Helen’s speech instructor.

Sullivan eventually followed Helen to the Perkins School, where she began receiving a formal education, and even to Radcliffe College where Helen earned her degree. Sullivan was a loyal teacher and companion until the day she died in 1936.

Helen Keller went on to become a world-famous speaker and author, an advocate for people with disabilities, and an active member of the socialist party. 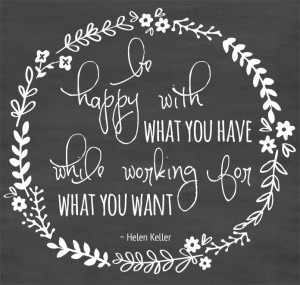 Have you been met with obstacles that Helen Keller inspired you to overcome? Whether you simply read them now or print them out and tape them to your desk, let these printable Helen Keller quotes motivate you to pursue greatness.

Overcoming Obstacles: How Helen Keller Made a Diff…