Class Acts: From the Cover of SI Kids to a College Scholarship

Few teen athletes have been more celebrated than Jessie Aney. In 2010, Aney was named Sports Illustrated’s “SportsKid” of the Year for her excellence in tennis and ice hockey.

Now, after establishing herself as one of the nation’s leading young tennis players, Jessie will be attending the University of North Carolina at Chapel Hill on a full tennis scholarship.

A graduate of Minnesota Virtual Academy, this 2015 Class Act student completed her high school course requirements in just three years, enabling her to focus on her unique abilities.

“My family has supported me through everything I’ve done in my life,” Jessie says. “They encourage me to pursue my dreams and give me the resources I need to get to where I want to go. My family reminds me of the importance of getting a great education. They also assist me with school whenever I am struggling with a topic.

“Online education has allowed me to spend more time with my family despite my busy schedule. It’s given me the time management skills and flexibility necessary to achieve my athletic goals in high school. I think those skills will continue to help me in the future.”

Although she plans to major in business, Jessie’s favorite high school class was AP Literature.

“We got to read so many interesting books and other literature pieces that I enjoyed,” she says. “I also got the chance to improve my essay writing skills, significantly, thanks to the feedback and constructive criticism that I would receive from my teacher.”

Down the road, that might lead to an autobiography some day, because Jessie could already write a book about her athletic accomplishments. 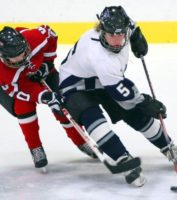 Giving up hockey was not an easy decision for a student from Minnesota, where high school hockey is a way of life. But Jessie realized that tennis held more opportunity.

This year, she moved up the U.S. Tennis Association rankings to third in the nation for girls 18 and under. Additionally, she was one of two players to receive a national sportsmanship award. In the final 2014 rankings, Jessie was ranked fourth and was the only 18 and under girl not from Florida or California in the top eight.

After winning the Minnesota Class 2A singles title as an eighth grader, then pairing with her sister, Katie, to win a state doubles championship in 2012, Jessie had planned to focus on playing national competition in 2013 and 2014. That was until Rochester Century coach Nick Crossley lured her out of “retirement.”

This season, she defeated some of the best male players in Minnesota, capturing the Section 1AA state boys title. Her only loss in 20 matches came to the eventual all-state champion, University of Nebraska-bound Toby Boyer.

In addition to appearing on the cover of Sports Illustrated for Kids (SI Kids), Aney walked the red carpet at SI Kids 2010 Sportsman of the Year ceremony in New York and was the subject of multiple photoshoots, including those with tennis icon Billie Jean King and New Orleans Saints quarterback Drew Brees, Sports Illustrated‘s Sportstman of the Year.

At the time, Jessie had aspirations of playing Olympic hockey. Now, that goal has shifted.

“I would say that right now I simply aspire to become the best college tennis player and student that I could possibly be,” she says. “I am going to take it day by day and, after college, I’ll consider going on the professional tennis tour. “

Class Acts: From the Cover of SI Kids to a College…