5 Banned Books You and Your Kids Should Read

by Paul Merced 2 Comments Books and the Arts

Summer is a popular time to pick up a good book. Whether it’s required summer reading for school or the latest best-selling beach read, it’s hard to put a good book down.

Not all books have gotten the praises they deserve. Many best sellers have been challenged, and even banned, from schools’ required reading lists and from school libraries.

From 2000-2009, more than 5,000 challenges were reported to the Office for Intellectual Freedom. The top five reasons? Sexually explicit material, offensive language, unsuited to age group, violence, and homosexuality.

Here are five popular books that might be worth a second chance: 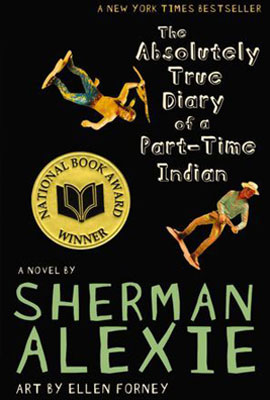 Book: The Absolutely True Diary of a Part-Time Indian by Sherman Alexie

Reason for being challenged: In April, a school district in Idaho had challenged the book as required reading. Parents had complained of the racism, religious mockery, use of strong language, and the sexual references made in the book.

Why should you read it?: Based on the author’s own experiences, Alexie teaches us that you can break away from the life you’re destined to live. It’s a story of a boy who took a risk and left everything behind in order receive a better education. It teaches us that a better life is worth fighting for. That no one has to settle for what they’re given. Reason for being challenged: Published in 1964, young Harriet gets caught up after a string of lies and misunderstandings catch up to her. During its release, Harriet the Spy raised a lot of controversy. She’s a tomboy with an attitude that talked back to her parents and teachers. Her use of strong language and urge to spy on others had parents raising questions as to if the book was suitable for young children.

Why should you read it?: Teaches kids that lying and spying on others can lead to a lot of trouble. Harriet’s world came crumbling down. She lost her friends, and her parents didn’t believe anything she would say. Harriet the Spy teaches us one of life’s greatest lessons. If you lie to your friends and family, you’re risking their friendship and trust. Consider other people’s emotions in your actions. Harriet the Spy has become a staple of children’s classic literature and has even been one of many books adapted to the big screen. Reason for being challenged:  The third most-challenged book in 2012, parents found it unsuitable for the target age group due to references to suicide, drugs, alcohol, and smoking.

Why should you read it?: Suicide is scary, but brushing it away as if it doesn’t happen, doesn’t prevent future cases. It’s a subject that makes a lot of people uncomfortable. Thirteen Reasons Why is a touching story that engages the reader to experience and empathize with what is going on with the characters. You learn how sometimes the way you view your actions as harmless may actually cause someone else a lot of damage.

Author Jay Asher told CNN: “The very day I found out Thirteen Reasons Why was the third most-challenged book, I received an e-mail from a reader claiming my book kept her from committing suicide. I dare any censor to tell that girl it was inappropriate for her to read my book.” Reason for being challenged: Topping the list of the most banned books in America is the long running, popular children’s series, Captain Underpants. The main challenges are concerns over “offensive language” and being “unsuited for age group.”

Why should you read it?: Many parents find that the hardest part of getting kids to read is that they lose interest halfway into the book. The fun illustrations and humorous relatable topics are great tools in getting stubborn readers to finish a book. For a more in-depth look at the “offensiveness” of Captain Underpants, check out Business Insider’s breakdown. Reason for being challenged:  More than 300 attempts have been made to challenge the books from school libraries for numerous complaints: “anti-ethnic; anti-family; insensitivity; offensive language; occult/satanic; violence.”

Why should you read it?: Many life lessons can be taken away from The Hunger Games. One of the most important ones is the power of self-discovery. From Katniss volunteering herself in order to save her sister to trying to keep true to her beliefs, she struggles with trust and fame. Katniss faces a problem many face in life; she has to learn who she is in order to survive.

As a former book seller, I can personally tell you how good it feels when a child gets excited when you find and hand over the book they’ve been looking for. Nothing should ever stand in your way of reading.

To learn more on banned books, check out the American Library Association’s list of challenged and banned books of the 21st century. See how many of them you’ve read (or want to read), and be ready for National Banned Books Week, Celebrating the Freedom to Read, September 21-27.

5 Banned Books You and Your Kids Should Read Books and the Arts Learning Liftoff Movie Review: Is The Giver OK For… Books and the Arts Made into Movies: The Best Book to Film Adaptation…
2